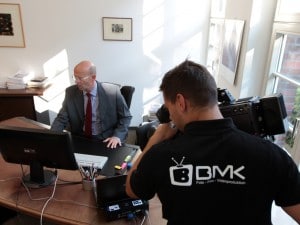 Successful corporate and image videos from BMK.TV company from Leipzig

Corporate films create trust and sympathy for brands and products

People love moving motion pictures. Movies evoke emotions and information, build trust and sympathy for brands and products and attract new customers. Films are able to build such credibility that cannot be reached to such extent by any other medium.

The time of classically produced image films using standard methods is over. Every business is different and target groups differentiate one from each other. The film should serve your business goals and shouldn´t be a platform for artistic self-realization at the expense of your marketing budget. What really counts today are credibility, transparency and honest communication with customers. The social media areas represent an opportunity and a risk. The opportunity in the enormous possibilities of viral spread of your marketing message in a positive sense, but also the risk associated with poorly made films full of false promises which are sometimes for laugh. With our experience and expertise, we want to support your marketing objectives and wishes. Let’s talk about it!