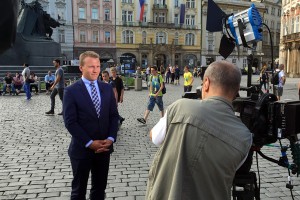 The professional film service for film productions, producers and editors in central Germany and in the Czech Republic.

BMK.TV is represented not only by the headquarters in Leipzig but also by its own office in Prague, which was opened in 2013 and which mainly works for German companies with a branch in the Czech Republic as well as for editors and producers from Germany.

We can realize the shooting in central Germany and the Czech Republic in the short term period and without much preparation based on our local knowledge and language skills and with the help of a network of creative people and service providers.

Reliability and “German thoroughness” is self-evident and the complete settlement of the services will be done via our head office in Germany.

... many thanks for the wonderful support. Everything worked out just fine. - A. Streck, EVOWORKX MEDIA

To get an idea of what we can do, take a look at the » BMK Production blog with detailed information on the completed live streaming projects.